DAY 294   What started as my 100 DAYS OF HEALING TOUR appeared to become a much longer and still ongoing tour. Yes, I’m an optimist. And I choose to always be one.

Without realising it, I landed back on Cyprus exactly 9 months after my departure. What am I doing here? For one reason or another I had to get back here just for a while, before the end of the year.

On March 15 this year at Larnaka Airport I was brought in a wheelchair to the airplane and with a chunk of plaster on my leg I hopped into the craft. For a while I have considered to have myself carried by such a Greek God, but actually the situation itself already was crazy enough. On December 15 lately I stepped out of the plane totally autonomic and walked with my little suitcase into the sunlight again.

In the term in between I went through an expeditiously development that changed my life in all aspects. While until then I was a mediocre runner, everlasting continuer and succesful runaway, a complicated ankle fracture forced me to sit still. And in that stillness progress on all levels arised; physically, mentally and spiritually. Probably in reversed order, so spiritually, mentally and physically. 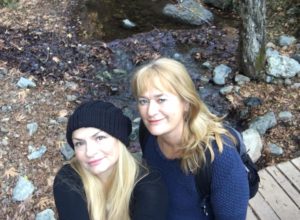 Today we finally did our delayed walk in the Troödos mountains,the plan we had on the 2nd of March, when Elia came to pick me up. But I dropped off the stairs, so in stead of to the mountains she brought me linea recta to the hospital.

I still limp and feel pain every day, but I have to confess that I wouldn’t have missed the lapse. I was unstopable and this tumble made me taking time to stand (sit) still for who I am and what I really want.

There where you stumble your biggest treasure is burried.
(Paulo Coelho)

Life is an adventure and I am a wanderer, a therapist and an artist. Once I thought I had to choose, but this year made it clear to me that I’m allowed to be all and that as an (icon) painter ánd as a therapist I can be productive and groovy.

Within one month the titanium framework will be taken out of my ankle. This has made the walking quite nasty until now and the doctor foretells me not to count on too much improvement, but I take the chance.

I will focus the coming year particularly on individual intensives and retreats, in which fundamental changes will be effectuated fast. I’ve already started this in the past months.

I know what I’m good at and I know what I love to do the most. And only that I will do the coming year.

I wish you all good, lots of love & progression in the new year!

This site uses Akismet to reduce spam. Learn how your comment data is processed.